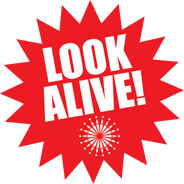 Eden Esther was born on Tuesday, February 17, 2009. Her name literally means “paradise star,” and she lived up to her name flawlessly. Eden somehow managed to be a laid back child, all the while 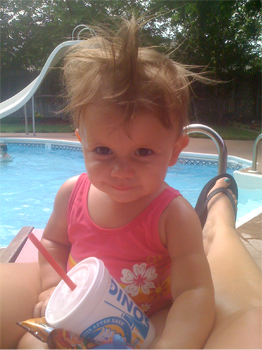 Eden seven weeks before
her diagnosis.

possessing a spark that would light up the room in an instant. From the moment she was born, she had magnetism about her that few could resist, and everywhere she went people stopped to smile at her. Eden’s dark brown eyes and sparkling personality left quite an impression on friends and strangers alike. Music was in her bones, and she had a boogie like no other. Give her an upbeat tempo, and her shoulder wiggle became center stage. Beautiful, bubbly, stubborn, precious, independent, and showstopper were only a few of the words people used to describe her. Like any true star, Eden loved being the center of attention at church, stores, restaurants, and family get-togethers. People wanted to hold her, talk to her, just to stare at her.

Towards the end of July 2010, Eden began having minor virus-like symptoms, such as loss of appetite, loss of energy, and a bit of vomiting. We took her to a couple of doctor appointments which ended in a diagnosis of “she has a virus….she’s cutting teeth….she’ll be fine.” One evening we noticed her side was obviously abnormally swollen so we took her into the emergency room. The doctor on call ran blood tests and discovered her to be extremely anemic. So much so that they admitted her and gave her a blood transfusion. Still the doctor’s diagnosis was that she had a mono-type virus that would last several weeks and because of that virus, her spleen was swollen. She was discharged. 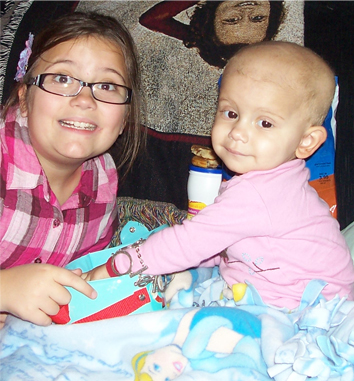 Three days later she still was not herself, so we took her back to the doctor adamant that we needed an appointment with a specialist. Something was not right.

On Wednesday, August 11, we drove to Oklahoma City to Dr. Meyer, a hematologist at OU Children’s Physicians Clinic. More blood tests were done and the doctor examined her. He said her side was not swollen due to an enlarged spleen but that she had a large, solid mass. We were immediately admitted and scheduled for an ultrasound and CT scan. It was a whirlwind of a couple of days that included a surgery for a biopsy, bone marrow test, and insertion of a port. It was a very long, agonizing weekend waiting on the pathologist results on the biopsy. On Monday, August 16, we had a diagnosis…Stage IV High-Risk Neuroblastoma, a childhood cancer of the sympathetic nervous system involving a solid mass on her left adrenal gland.

Over four and a half months, she endured a biopsy, two bone marrow aspirations, two central port placements, two central lines, a stem cell harvest, five high-dose chemotherapy rounds, numerous blood transfusions, a battery of scans and tests, and several days in ICU. Eden remained a little light on the oncology floor of OU Children’s Hospital during all of her hospital stays, and nurses fought to take care of her for their twelve hour shifts. Thousands followed her story on my Caring Bridge blog and took my advice to “Look Alive!” And thousands prayed for her. Eden was a fighter and was beating her cancer. Her last MIBG scan showed no active cancer cells, and doctors were making plans to remove her tumor. However, on December 26, 2010, she lost her battle due to complications from chemotherapy. She was 22 months old.

My sister put it best one time when she said, “Eden made each of us feel like we were her favorite.” And that she did. She once crawled right up into the lap of an older gentleman drinking coffee in her grandmother’s café. She had never met him. Her eyes lit up each time she saw the fitness trainer at my gym. Later, he would say that he knew Eden loved him. A retired doctor in town proclaimed months after her death, “I sure did get attached to that little Eden.” As hindsight is usually clearest, we have come to realize, after hearing people recount story after story of Eden’s effect on them, that Eden wasn’t called a “Showstopper” just because she had beautiful brown eyes. People were not drawn to her simply because she was cute. And while she had and was those things, Eden impacted people because when they met her they came face to face, knowingly or not, with the unshakable, undeniable, irrefutable force of God’s love. In a word, Eden was a firework…spreading goodness and light, and we want to continue her legacy. Ignite hope. And look alive.

“It is in the dark that we learn how bright our light can shine.” TeNeil